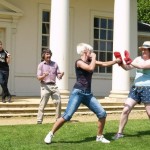 In 2010 draconian cuts to organisations supporting vulnerable people marked the end of Bedfordshire Social Enterprise Wooden Hill UK Ltd. Directors Cally Lawrence and John Handscombe decided they might as well be poor doing what they loved best – Theatre. So out of the ashes rose No Loss Productions, with a tag line Theatre for everyone, in spite of the cuts! Fast forward a few years and we’re still here striving to bring high quality, affordable theatre to audiences in Bedfordshire and beyond. Over the past few years we have been privileged to work with some amazing actors, writers, venues and arts practitioners on a wide variety of projects. Long may it continue.

Cally grew up in Bedfordshire knowing from the age of six that she wanted to be an actor, she finally got to drama school in the early 90’s and has been working as a “jobbing” actor and director since 1995. In that time she has been lucky enough to work with Ricky Gervais in The Office Christmas Special, Jennifer Saunders in The Life & Times of Vivien Vyle and David Mitchel and Robert Webb in Peep Show. She has appeared in Hollyoaks, Emmerdale, Corrie, Doctors and Heartbeat, done a lot of tv comedy and even got to be in a Pot Noodle Ad!! However, Theatre remains her first love, be it Shakespeare, New Writing or shows for family audiences and being able to do the thing she loves in her home town is what gets her out of bed in the morning! 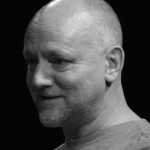 John also grew up in Bedfordshire and although no longer lives in the Shire, comes back to direct shows or contribute new writing to StageWrite. John has also written and directed shows at The Finborough in Earls Court, written for a History Channel drama-documentary and is currently working on various projects for radio and television.