Natalie Castka is no stranger to No Loss Productions, with appearances in George’s Marvellous Medicine and the Merry Wives of Windsor. Now she is back to take on the role of the easily frightened Eightees. 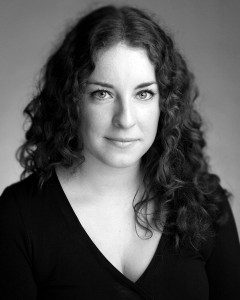 “When Cally mentioned Wild Things I went a bit mental because I absolutely love the book. It wasn’t quite begging  but I was very keen,” explained Natalie.

Natalie started dancing at the age of four, the move into acting is something Natalie describes as an ‘accident’, she said:

“I gave up dance and mum sent me to a local theatre group and then I went to university and there wasn’t really anything else I liked to do so I carried on with that and here I am.

“I’m always looking for something new. I’ve had a varied career so I look for things that are new and different. I normally get put as the nasty, evil role but I think that’s more fun than playing a nice girl. I’m a nice person but its nice to embrace your inner bad girl.”

This summer Natalie performed to the world at the opening ceremony of the Paralympic Games but it is in the theatre, particularly performing to children, where her true passion lies, she said:

“I’ve done a lot of touring doing children’s theatre in schools and then I’ve also done work performing to older children but the younger ones they seem more up for it. They have such vivid imaginations and they’ll accept anything you throw at them, so it’s exciting.

Natalie is clearly excited about her return to No Loss and the opportunity take on a completely original script , she said:

“Last year for George’s Marvellous Medicine it was a small cast but we all came together really well and it will sound really cheesy but it was like a little family. Everyone put so much into it and I couldn’t wait to get back and do the Shakespeare this summer. It was a bigger cast but again everyone was so friendly. It’s such a lovely company to work for.

“Wild Things is exciting because there is no one to tell us what we can’t do. So we can run free with it, go a bit wild. I’ve got a few ideas up my sleeve so we’ll see what happens in rehearsals.”